Yeah, I know you haven't heard from me in a while.  I've been trying to fit a year into the last month of my summer before I go back to work, even if it's a temporary gig.  So, I've been spending my days playing with my kids and getting the last of the to-do chores done.  Fun over blogging.  I don't feel bad about it.
That said, one of the things on my to-do list was to get the chicken arc ready for layers.  So, last week, I finally got to it as my birds were getting to be 5 months old.
I started by building a platform with left over plywood and 1x2 scrap from the coop project that I'd been saving for this very reason.  The placement was as high as it needed to be to reach the sides of the triangular arc. 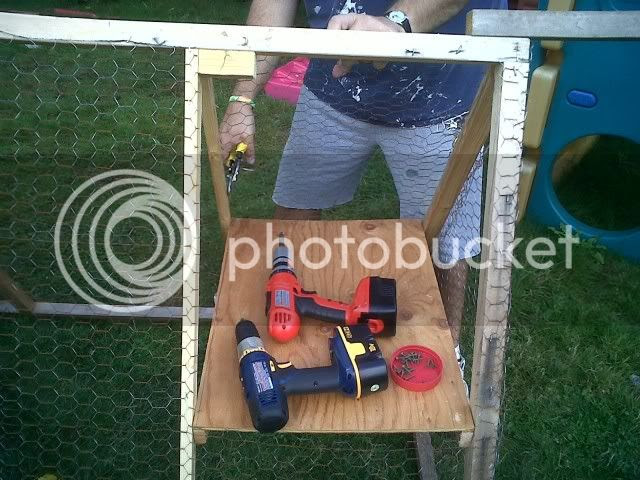 Sure it doesn't look extremely sturdy, but really, how heavy duty does it need to be to be to support a few hens laying eggs?
After that, I decided to use recycled corrugated fiberglass panels from my broken compost cover for the sides.  Not only is it water proof, but it adds more light, which will be good during the winter months.  The door was a bit more tricky as I had no idea what angle my arc was set at, so we resorted to tracing it on the plywood and cutting it out.  I used a left over hinge that was way too big for the application, but I had it. 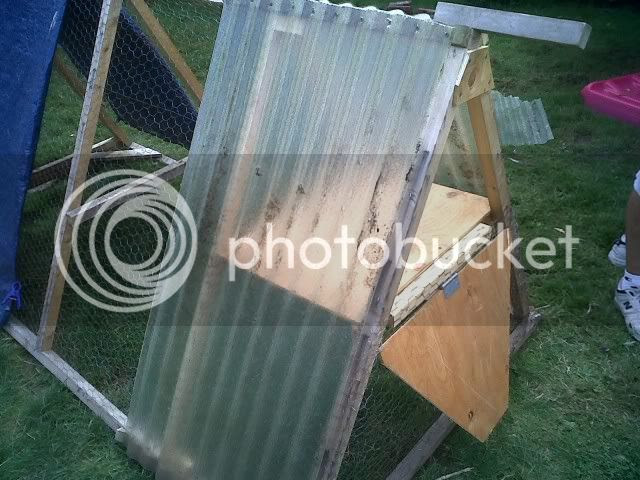 My brother wanted to use a hook latch for the closure, but I have found eye-hook latches to be pains in the rear over the last few months.  I like barrel bolt latches much better.  Thankfully I had one on hand, so I used it. 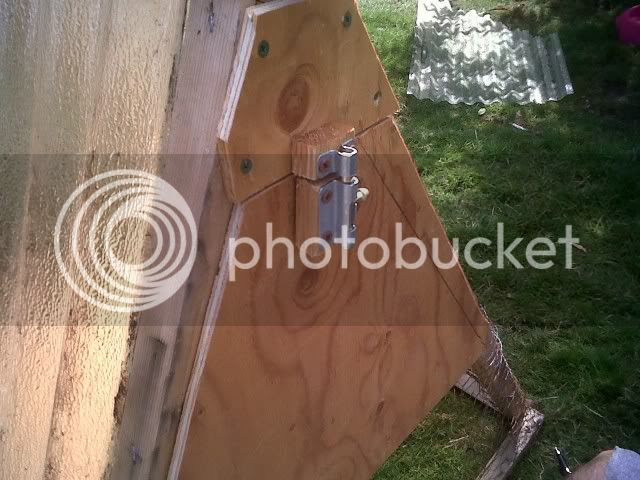 So, as it sits now, it isn't pretty, but it's very functional and not particularly heavy.  Just what the doctor ordered, and if you read yesterday's post, I built it right in time.
It's not finished yet.  I still need to build in a lip to keep nesting material in there, and maybe build some sort of a ramp to let the chickens up there.  I'm thinking of indoor outdoor carpet in the nesting box to help keep the eggs from rolling around when the arc is at an angle, which happens regularly, depending where it is in the yard.
I also want to replace the rusty chicken wire with some galvanized welded wire, maybe in the inch or two variety, to cover it.  As winter approaches, it may be that the hens are out after dark some days, so I want to make it temporarily predator proof.  I've got my work cut out for me.
Enjoy!
Posted by Sinfonian at 8:00 PM 2 comments:

It's been five months since I got chickens, so they're five months plus a few days old.  They're definitely hens now, about as full grown as I expect them to get.  They've got combs and waddles like you'd expect from hens.  We had everything we expected, except eggs.  I've been looking daily for a while now, with no luck.  I haven't been concerned as my chickens are much bigger than my brothers (for some unknown reason). Let's just say I've been anxious.

So I guess I wasn't completely surprised, though very elated when I found this while I was putting the chickens away for the evening. 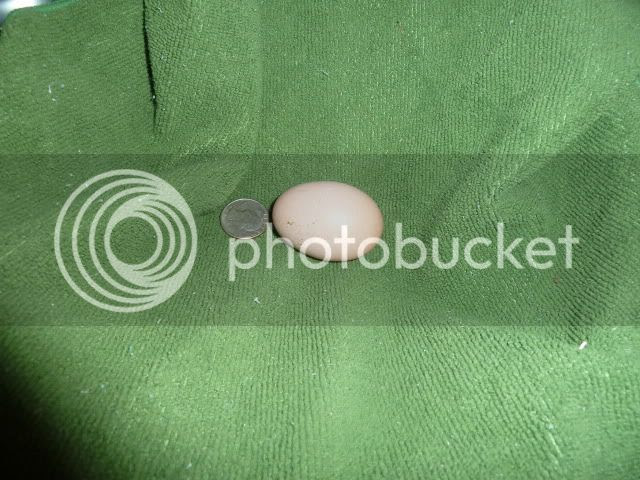 As you can see by the quarter next to it, it's about 2/3 the size of a regular egg, or about the size of a bantum egg.  Not at all bad for a first attempt, if I may say so.  The shell's a bit rubbery feeling but otherwise it looks like a perfectly good egg.  Not one of those partially formed mishappen eggs you read about.  Maybe it's the fact that I switched to layer feed a few weeks ago, or maybe it's the 8 plus hours of foraging they get to do every day.  Whatever it is, I'm proud of my girls! 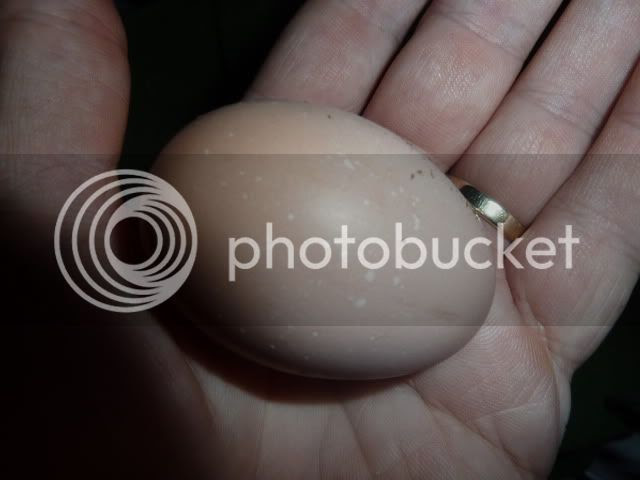 And here's the last picture I'll bore you with.  I love how different the egg looks as I rolled it in my palm. 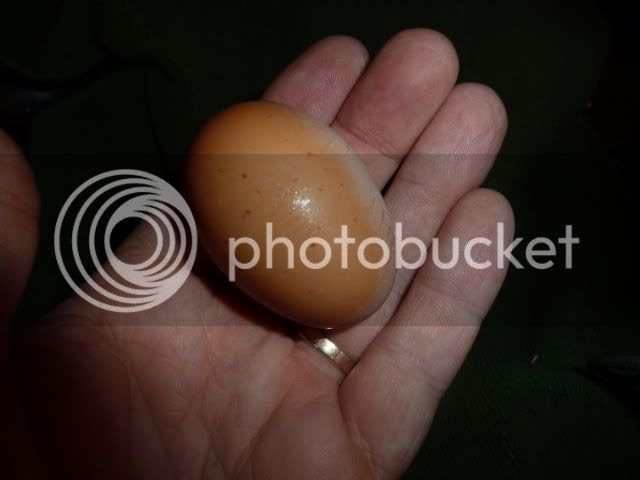 Well, the girls escaped this morning and I was rudely awakened on my day to sleep in so I could round them up.  Seems my kids didn't do as good a job locking the run doors as it sounded when they helped me put the girls away last night.  I just can't see how they'd get the latch opened if it were properly locked.  If not, a good push would open the doors and I know they're capable of that.

No harm done it seems, they all seemed to be hanging out on the patio or on the grass where they normally are kept in the arc.  They probably want food as they seem to devour everything I give them in seconds.  Well, all their regular food that is.  They've seemed to sour on the cabbage that I chopped up and have kept in the produce drawer in the fridge.

I keep expecting to see some mis-shappened eggs, but as yet nothing.  I also wonder if I should be baking and grinding up egg shells to supplement calcium right before the whole laying thing starts?

In other random chicken news, I saw the neighbors of some friends of ours using a spray bottle on their chickens to get them to quiet down, so today I tried it out.  It worked like a charm, as they quieted right down and simply shook their feathers to get that nasty water off them.  One of them even clearly liked the taste of it when she moved and got hit in the face by it.  It was humorous and worked well, so I think I've got a new way to keep them quiet...ish.  I expect they'll be their breed-typical loud selves when they lay and I won't stop that unless I get complaints from the neighbors (sure hope not as they agreed to me having them).
Anyway, it's all chickens all the time around this blog of late since my fall garden isn't doing much and my spring garden's all bolted.  I'm still hopeful about the countless flowers on all my tomato plants though.  Maybe tomorrow I'll take some pics of the green tomatoes that are growing on a few plants.
Hope your garden is doing better than mine!
Posted by Sinfonian at 10:13 PM 2 comments:

Maybe a short post as an addendum to last night's.  Chickens are crazy!
I think I mentioned that I'm taking care of my brother's flock while they're gone.  I should have mentioned that when I let them out at night (my brother's method to get them into their coop), they mill around for a second, then do their best to get under my feet as I transfer stuff back to the coop and refresh their food (they go in as they want their food that they JUST had access to in their arc, crazy, right?).  So as I'm refreshing their food, they like to jump up next to me and get the first pecks in.  Tonight they even jumped on top of the tray while I was trying to open it to refresh it.  It was then that I realized that his chickens don't like the top part with the holes any more than mine do.  I had it partially off and the one in my arms dug in like there was no tomorrow.  So, I took his top off also.  Sure enough, the girls didn't even let me get out of the way when I opened up their run. In seconds they were all diving into the open tray.  No wonder his birds are a tad smaller than mine. I've had my top off the tray for weeks.  So, long story short, his are people crazy.  They didn't care that a relative stranger was putting them away, just that I had food. ROFL.
Now for my chickens.  I may have mentioned that they're getting more vocal.  But tonight, we heard them from across the street.  I thought either they were trying to lay an egg or something was trying to attack them.  I ran over and they quieted down.  I have no idea what got them riled up, but I sure hope they stop bocking so much, or someone may complain and I'd have to get rid of them.  Wouldn't THAT be horrible?
Anyone knowledgeable in chicken raising know why they all of a sudden got so loud at 4 months?
Posted by Sinfonian at 9:29 PM 1 comment:

Email ThisBlogThis!Share to TwitterShare to FacebookShare to Pinterest
Labels: Chickens

Summer may be waning, but my chickens are getting closer and closer to laying.  They're developing waddles and combs at record paces, just in time to need them as temperatures SOAR into the upper 70s.  That's right, we've had exactly 78 MINUTES of temperatures in the 80s this year, meaning we're way behind our zone for warm temperatures.

This week I've been busy keeping tabs on both mine and my brother's chickens as they're on vacation.  His birds are a bit smaller than mine, but will do anything you ask for food.  Mine are holy terrors when it comes to food and devour it whenever they have any.  Like a fool I keep filling it. Hehe.  These girls are going to eat me out of house and home.  Nearly two 40 pound bags gone in 4 months.  Yikes.

Anyway, I finally fixed this problem with my coop... 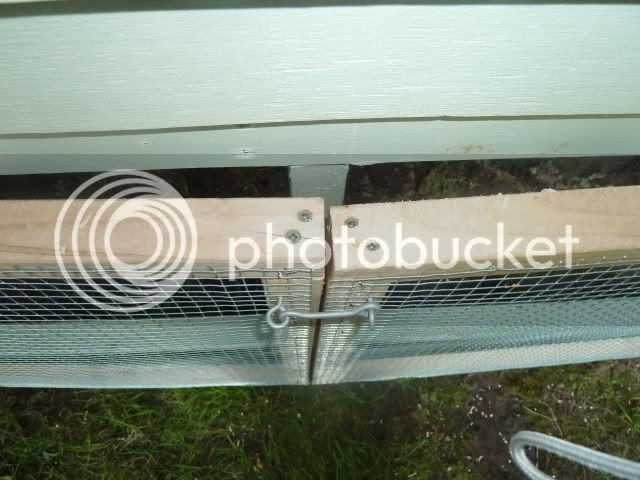 You see, I've taken to leaving the pop door down all night to allow the girls access to their mini-run in the morning before I go out to let them into their arc.  So, while I've got hardware cloth around the entire run, this gap at the bottom worries me for small critters that may be able to do the hens harm.  I've been trying to figure out a way to keep them closed. I thought one of those magnet cabinet closure pieces would work, but I didn't want to have it rust in the damp Pacific Northwest weather.  A trip to my local True Value led me to a different type closure that I'm quite happy with. 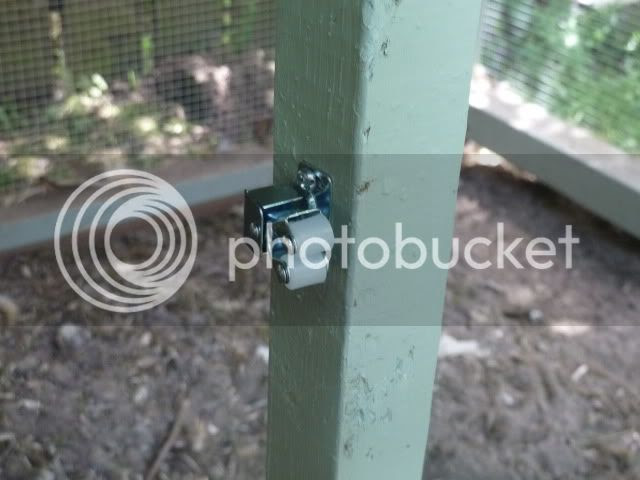 A bent arrow-shaped piece of medal fits in between those rollers.  I had a devil of a time placing these, as they need a fair amount of overlap to attach them.  Thankfully I convinced my eldest to crawl into the run and mark the best placement for the rollers and arrow piece.  They're not in the same place on the coop, but who cares where they are if they work. 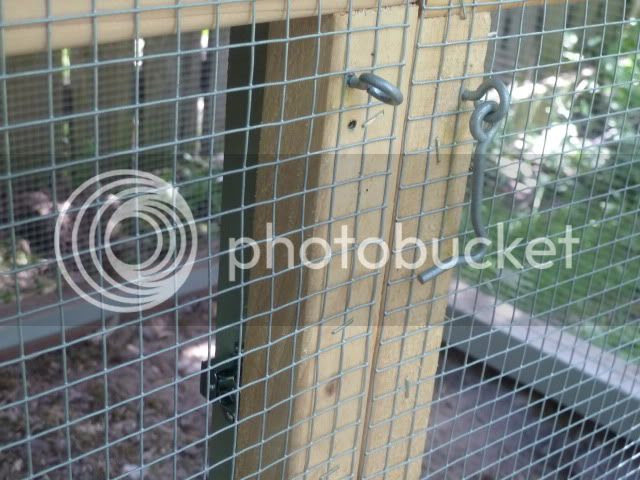 Now it closes like a dream and I can feel safe keeping the pop (chicken) door down all night. 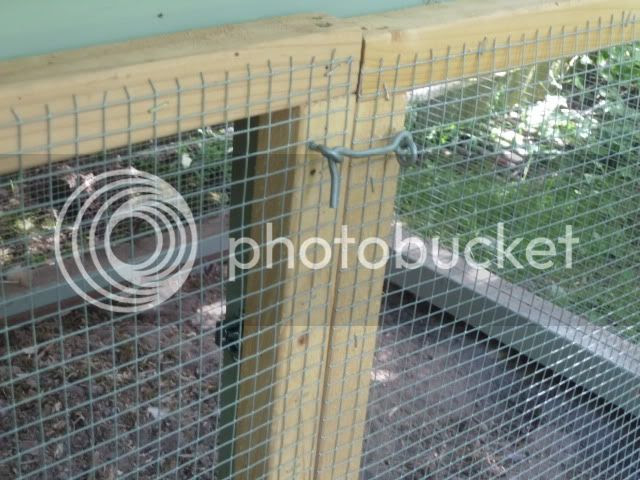 That project down, I also finally threw a hook lock on my arc.  A week ago I actually forgot to get the girls in for the evening, and shortly after dark there was a bocking and pecking at the sliding glass door. They'd got out and came to the only light source, our house.  It wasn't hard getting them in as they don't move in the dark, but I had to keep them from pushing the door of their arc open.  I didn't think they had it in them, but I was wrong.  So, now there's a hook to keep it closed. 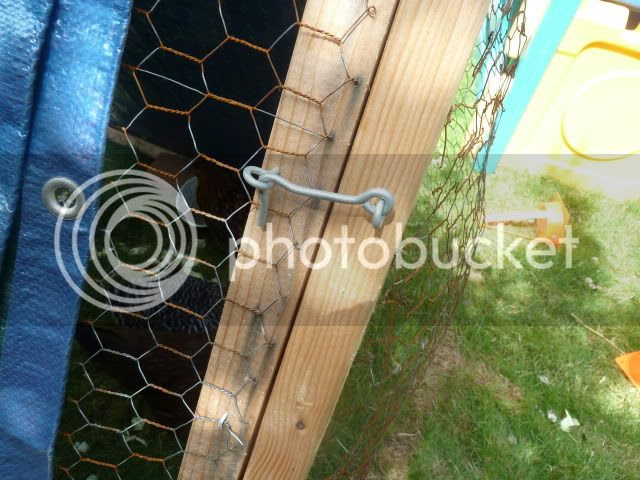 Lastly, I'll leave you with a pic of the girls to show how they've grown.  One month left before they start laying (hopefully). 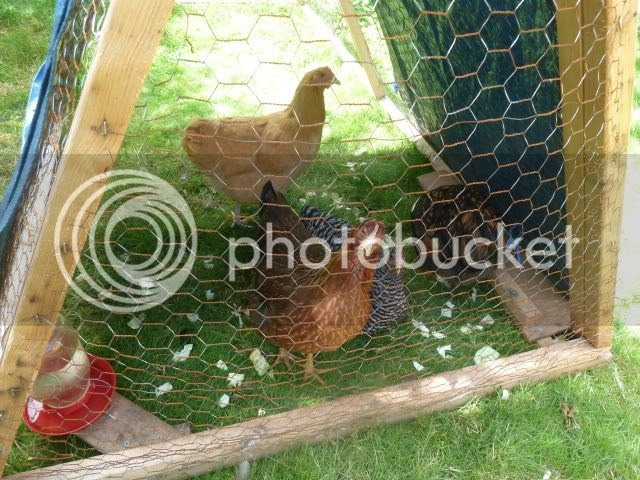