That's right, the chicks arrived, two days sooner than expected. Guess the poor postal service didn't like all that peeping. Hehe. We here at the farm sure do though. It's music to our ears.  And without further ado, here are the girls, tired from the move. 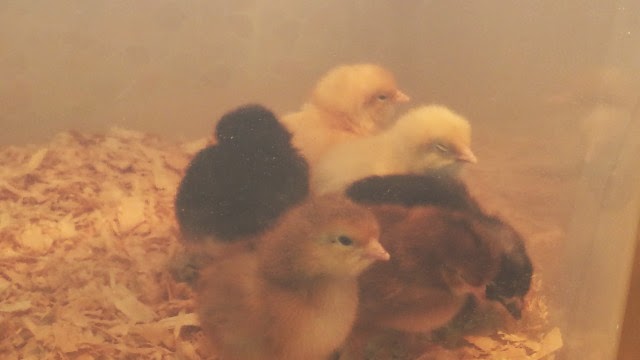 I did move the heat lamp down a bit just in case, but I think they are just getting used to their surroundings.  Here's a good pic of them not through the murky Rubbermaid container. 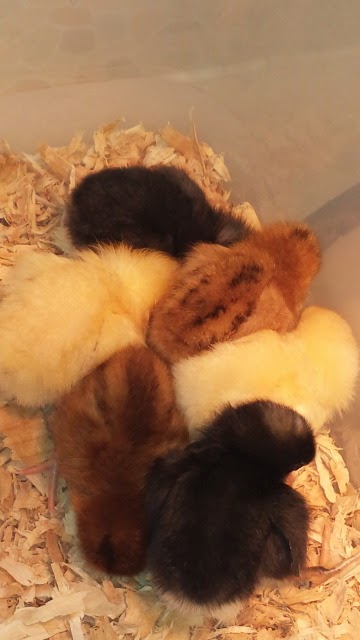 The kids want to name them again. I let them as they're ok with the fact that they're not long for this earth.  Speaking of which, the two remaining hens aren't laying still, so they may not be long for this world either.  Anyway, here are some close-ups for those of us that just can't get enough chicks. 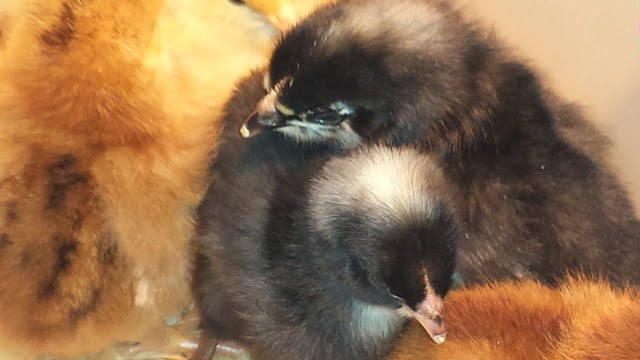 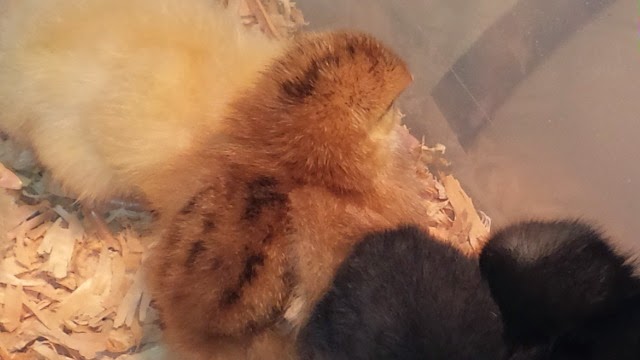 And last but not least, my Buff Orpingtons... 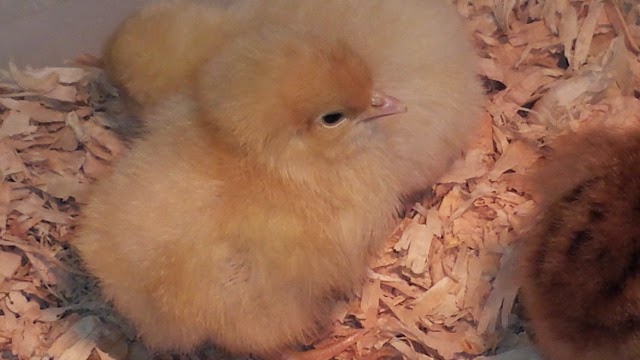 And lastly, in case you were thinking it was just me liking the little girls, here's what happened when I opened the lid on the box they came in... 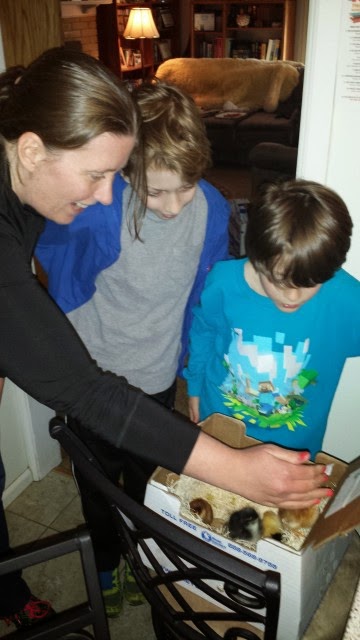 Email ThisBlogThis!Share to TwitterShare to FacebookShare to Pinterest
Labels: Chickens

Spring is in the air!

As everyone knows, spring has sprung.  The days are getting longer and even in the Pacific North Wet the days are getting brighter.  Bulbs are blooming and trees are budding.  Even our fledgling fruit trees have buds and flowers on them.  My wife wants to let them fruit, but I'm in favor of continued growth of the tree which would mean snipping the flowers so all the energy goes into growth.  Ah well, she'll win out so why do I bother.

Well, some of you may have read about my scout Pack Meeting activity with soil blocks.  Well the next weekend (last) I broke out and made a bunch of my own.  You can see below that I packed them in as tight as I could on the left. The only challenge I've seen with doing that is the roots growing together, which is no big deal if you just tear them apart.  The other thing I recall from prior years is the spider web fungus that grows between the cracks.  My research showed it was nothing to worry about, so I don't.  Anyway, as you can see in the far left of the picture, the initial plantings from the night of the scout meetings sprouted fast with my new heating pads (black pad under the white trays).  They work very well if I say so myself.  A thermometer between the tray and pad was 90 degrees.  Not bad for $25 each. Gotta love Amazon Prime. 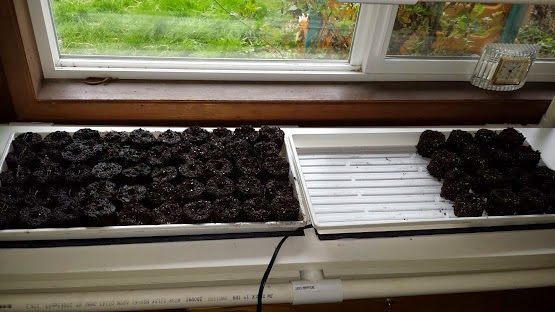 I digress.  You can see the sprouts reaching for the sunlight.  I had to fix that quick or they'd get leggy.  So out to the garage I went and hooked up my lights. I had to buy new chains and S-hooks because they got misplaced in the garage.  So I'm about $100 into my garden hobby this year.  Oh well. The stress relief alone is well worth the cost.  Thankfully the PVC frame held up like a charm. Below you can see it all hooked up.  Looks like I bought too much chain.  Oh well. 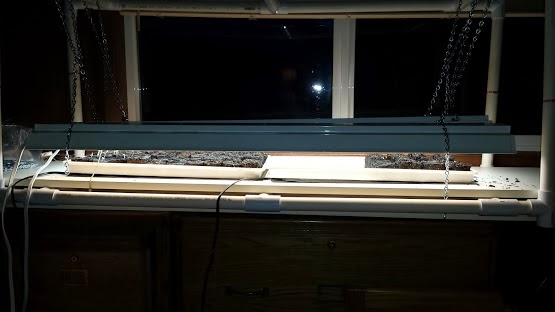 The other thing that happened this weekend is that we had an unwanted house-guest.  No, not my mother-in-law, we love her to pieces.  It was actually a woodpecker. Dumb bird kept waking up my son as it was pecking right below his window in the garden area.  I didn't take a picture of the first hole that went all the way through to the attic, I just covered it in a hurry on the way out the door to the theatre. 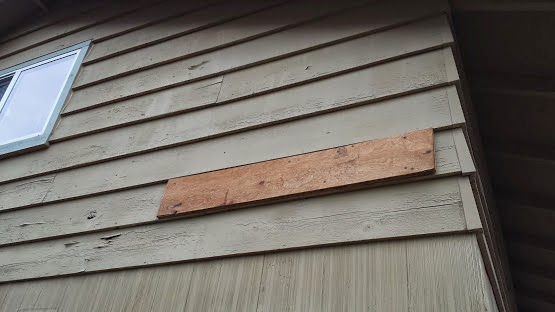 The wood is salvaged from the floor we replaced in my son's room.  Going to need to weatherize it if I don't replace the siding on that side of the house, but that'll be very expensive.  Unfortunately it just made the woodpecker move over... and start pecking right into my son's bedroom! That call made me drop what I was doing at work and run home.  Thankfully I found the bird hadn't gotten through to the drywall. 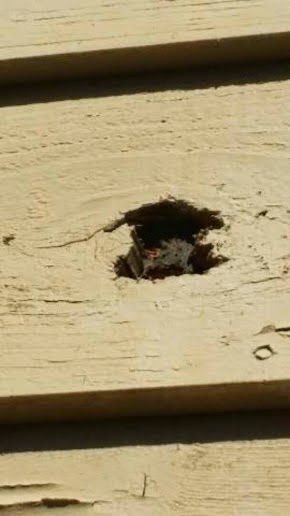 You can see the black tar paper.  It's not horrible.  But I had had it.  I needed to go to drastic measures.  Not only did I put another board up, but I stapled up temporarily a 4 foot swath of chicken wire. 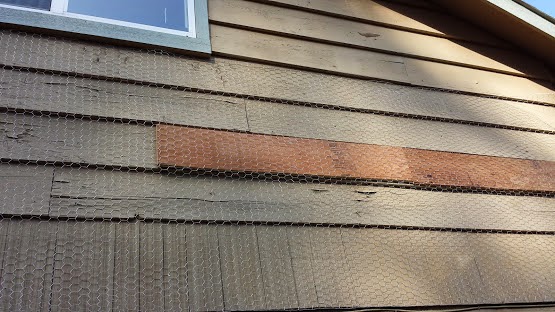 Boy was that a process, two stories up. We even had my youngest hanging out the window (blocked by a ladder) holding up the wire while I stapled it in place.  Here is a close-up. 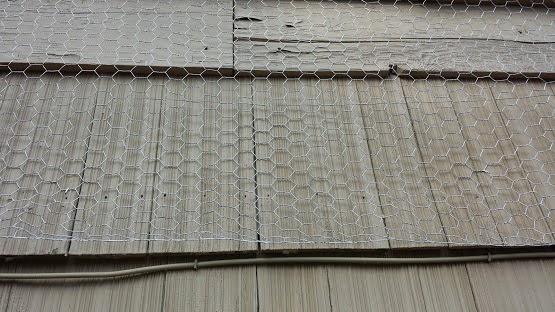 My wife didn't think it would deter the bird enough, but an hour after I wrapped up, what did I hear? A woodpecker pecking a few houses down.  Not that I wish that on anyone, but come on!

After that we went on a nice spring walk and grabbed Subway for dinner.  Great to see so many neighbors out weeding or just going for a walk.  Gotta love spring!
Posted by Sinfonian at 8:39 PM 1 comment: