Well, I finally cleaned out the chicken coop and changed the bedding.  The girls were glad I did it too.  By girls I include my wife, who had asked me to do it.  She's been pretty much taking care of the hens since I went back to work.  I am away from the house when they need tending to.

I really think I could have gotten more than 6 months out of the bedding if Fall hadn't arrived.  You see, we've kept them in their coop during the day far more often then when the weather was nice.  They tend to make a much bigger mess of the place when they're cooped up all day (pun intended).

Anyway, I got two wheelbarrows full of used bedding that went on top of my compost pile.  I should really mix it in with some greens to speed up the decomposition, but until I get some more Starbucks coffee grounds, the chicken manure will just have to suffice.

I used up half a bale of pine shavings in the three nesting boxes and the coop.  My brother picked up a bale for me from the feed store the other day.  I was a bit disappointed that it was a national brand like you see in pet stores in small bricks.  In the past we've purchased local shavings from Washington, just like our organic feed from Bellingham.  The price was the same, but I just feel better using the local bedding.  This will work, but next time I stop in at the store, I'll talk to them to find out what happened to their local source.

Lastly, the chickens haven't been foraging much at all this past week.  The weather's been crappy, the arc is too heavy for my wife to move by herself and the grass just isn't growing.  I'm thinking they'll just be home-bodies this winter, using the area in front of the compost bins as a run whenever we bring them out.  There isn't much grass there anyway, and if they kill it, no biggie.  About the only non-feed they're getting are table scraps and the occasional pear that drops from the spent pear tree.  I won't eat the fruit, but they love it.  They'll get the over-spotted apples when I pick them also.  Boy I wish they liked morning glory! The rose garden is covered in them. /shrug

Enjoy your garden!
Posted by Sinfonian at 6:14 PM 2 comments:

Thanks Wishingbee for the kick in the pants to get back here to post.  However, I can't say much is going on in the garden.  It is fall of course, and the summer heat killed all my tomatoes such that I only got a handful of each variety to use.  The good news is that our salads have been marvelous.  We've got lettuce (only Italienshier grew for me this fall, but it's good), spinach, and tomatoes.  If only I'd grown cukes this year, I'd have a perfect salad.  Oh, and I never have timed my salads right with my radishes, they've all gone to seed.  Shame, I do love a good radish.

Anyway, the girls are going strong, giving us 2-4 eggs a day, such that I gave a dozen to my folks and brother, since his chickens for some reason haven't started laying yet.  It's odd since they're the same breeds bought from the same store on the same day.  Very odd indeed.  Of course 5 days after I gave away two dozen eggs I had another dozen to use.  They're delicous but defnitely "large" variety eggs, unlike the extra large we get in the store.  Haven't had an opportunity to bake with them yet, but I'm a bit worried about a recipe calling for 1 extra large egg.  That we don't have. 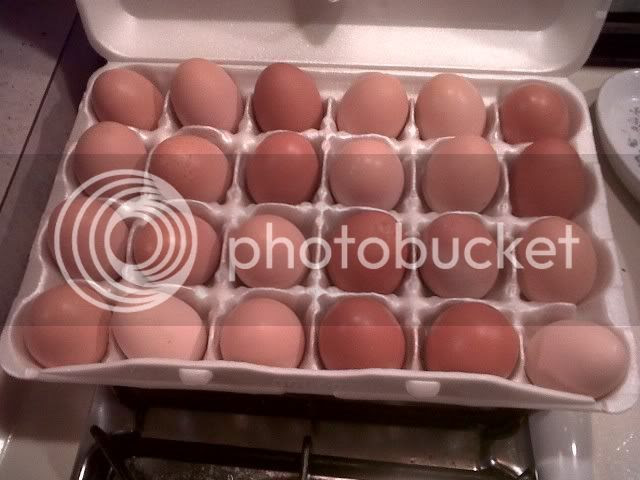 I've seen extra large eggs from so-called "Production Reds" that are a cross between production Leghorns and Rhode Island Reds.  According to my wife, they're not very cute, but who knows.  Something to consider next time.  I do like our birds though. They're cute, a bit loud, and friendly.  About the only thing they don't do is use the roost.  Oh well, no biggie. 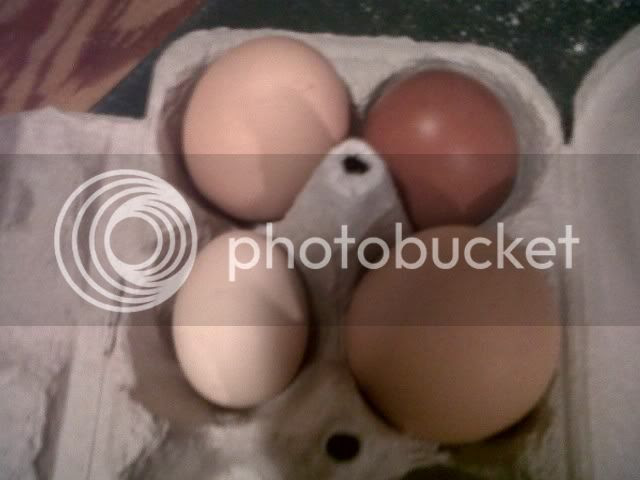 So, I hope you all have an "EGGstremely" good weekend!